Hello all, Codey again looking over the game “Quantum Quest”, it is a game settled in the year 3241, in a Cyberpunk world. It features classic RPG like aspects as well as game-board mechanics, the game piques my interest by doing something you don’t really see many games doing. Of course there are games like Table-top simulator, but that game and games similar to it aren’t always focused on one topic. It’s more of downloading smaller games packed into one game like Blackjack or Jigsaw. You get the gist of it. While this game I feel could be very effective at what it’s trying to do, and that being focus on one main topic.

In the story mode, as written on the indieDB page it says you play as a bounty hunter, or rather instead of one bounty hunter a group of bounty hunters. They dwell in the underground and are involved in a racket which includes their loved ones and themselves. Interesting to say the least. Another interesting quote from the indieDB page is “The human being has achieved to exceed his own natural limits through science. Genetic engineering, nanotechnology and artificial intelligence have been assimilated on the society in every city on the planet”. This, obviously referring to the Cyberpunk theme. As well as a lack of capital leading to high crime rates. Hence the bounty hunters.

The game mechanics on the indieDB page say each turn is cut up into 3 different phases, Strategy, Action, and Control. The “Strategy” section is a secretive phase which allows the player(s) to decide what they are going to want to do in the “Action” phase. Now, going onto the “Action” phase, during this period the Action cards the player selected in “Strategy” section are all exposed and they see how it plays out, either in their favor or against. And going to “Control”, during this time special events occur leaving players with certain modifiers like injuries or shock, along with various others.

The main features of the game are: 6 bounty hunters, 6 villains, story mode with 10 missions, 4 enemy factions (8 enemies per faction), a mission editor, and multiplayer functionality (Co-op, Vs mode). This of course being cited off of their indieDB page. To me, I feel this game could go far if it happens to meet what the developers want. If it does, I’ll definitely buy if/when it comes to Steam.

And also, the teaser trailer here.

Some more art of the game here: 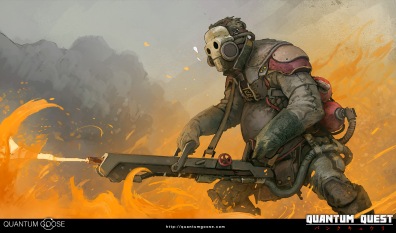